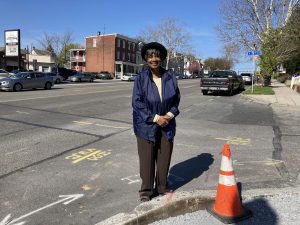 Harrisburg resident Evelyn Hunt, who opposed the State Street project, near her home on State Street.

Construction on one of Harrisburg’s busiest streets is coming to a halt, after residents expressed concern with the project.

On Wednesday, Harrisburg issued a cease and desist order for construction on its State Street Rapid Response project, proposed in 2018 as a way to decrease pedestrian fatalities on the Allison Hill road. In recent weeks, the city has received numerous objections from neighborhood residents opposed to the project.

“This is a result of residents’ concerns,” said Matt Maisel, communications director for the city. “We’ve listened and are determining the best course of action.”

Construction on State Street began two weeks ago, according to Maisel. Under the former plan, the street was slated to undergo a “road diet,” decreasing the number of lanes from five to three. Additionally, there were plans to add protected bike lanes, improve crosswalks and include a median refuge area.

However, the city is now reconsidering all of those plans, based on feedback from some residents.

During the past few weeks, construction had begun to install ADA ramps on sidewalks and to remove some of the yellow lane lines from the road. But, on Wednesday afternoon, construction workers were no longer at the site. Until further notice, the project will remain frozen while the city works on a redesign with PennDOT, which has jurisdiction over the state road, Maisel said,

“No parking” signs that were posted along the street were also taken down and covered up on Wednesday.

Resident Evelyn Hunt, who has lived in her State Street home for 60 years, was happy to see the city respond to her complaints. At a City Council meeting on Tuesday night, she shared her concerns, largely over what she saw as a lack of communication with residents, parking issues and the proposed bike lanes that she believes will go unused.

“This is telling people that you must move your car so people that live outside of the city can rush into the city,” Hunt said. “Where are all of these cars supposed to go?”

Hunt is not the only resident to object to the plan, according to Maisel, who said that they received many calls from upset residents since the construction began.

“The number of complaints and the nature of the complaints made us rethink and reconsider,” Maisel said. “We are listening to the concerns of our residents and have their best interest in mind. Our main goal of making State Street safer remains.”

Hunt was glad to see that construction had stopped and hopes the city explores alternatives to making State Street safer, such as better parking enforcement and traffic light additions and upgrades.

Once the city proposes a redesign, the plan would need to go back to City Council for approval.

“I’m thrilled that they did listen, and they heard what I had to say,” Hunt said. “My neighbors are very pleased.”

If you like what we do, please support our work. Become a Friend of TheBurg!