Alex D’Alessio was completing his bachelor’s degree in civil engineering at the University of Maryland when one of his professors told him the best engineers were often the laziest people. Those people, his professor told the class, were also the ones who decided to find a solution.  Now, Alex shows […]

Alex D’Alessio was completing his bachelor’s degree in civil engineering at the University of Maryland when one of his professors told him the best engineers were often the laziest people.

Those people, his professor told the class, were also the ones who decided to find a solution.

Now, Alex shows off his creative solutions and renovation mistakes to about 424,000 followers on TikTok and Instagram combined.

He and his now-wife Kylie D’Alessio bought their home in Baltimore City in August 2020. They didn’t have the money to hire contractors to fix up the older areas of their home. With no experience at all, they took on projects themselves.

The first big project was redoing their laundry room in September 2020, Alex said. The previous owners rented the townhouse for years, so the laundry room was in “pretty bad shape,” he said.

They expected it to be done in a weekend. Instead, with a lot of help from YouTube, the project took more than a month. It was stressful, but when they stepped back and looked at their work, they were in awe.

“Everything from there [on] was built on top of the confidence from that first project,” Alex said.

Throughout their renovation, they sent their friends and family videos of the process. After the laundry room was finished, Alex started posting videos of himself working on different projects on TikTok.

He posted the first video in December 2020, but went viral in February 2021 when he posted his full bathroom renovation. The video currently has about 863,400 views on TikTok.

When they first started renovating their home, Kylie was the handier one, she said. But Alex did a lot of research in his down time to figure out how to use tools and do floor tiling himself, she said.

Now, Alex does most of the construction, while Kylie makes the design decisions.

“He doesn’t make any legit hard decisions without my, I guess, approval,” she said.

Since he started making videos, Alex and Kylie have made a built-in bookcase, finished the basement, redone the master bathroom and made other built-ins around their house.

[Women are redefining what it means to be a musician]

Living in a house that’s under construction has been an adjustment, Kylie said. They have to make sure Alex keeps his stuff in one area and remember to plan ahead, she said.

Alex wanted to highlight the fact that he was just a normal person who made mistakes in his videos. He often jokes in his videos that he’s a student of the “University of DIY Youtube.” Many other creators just show the perfect finished product, he said.

“It demotivated me and made me feel like I could never do something as good as them and so when I started my page … I wanted to show the real life parts of the renovation,” Alex said.

He’s failed plenty of times while trying to complete a project, he said. Those videos stay up, because he never wants to be seen as someone who knows exactly what they’re doing, he said.

After he got a bachelor’s degree in civil engineering in 2018 and a graduate degree in project management in 2019, Alex worked at Clark Construction.

In October 2021, in the middle of renovating his master bedroom, Alex quit his engineering job to pursue content creation full time.

Neil Schulman, one of Alex’s professors during his masters degree program, said when Alex told him about the decision, he was surprised but excited for him.

“It’s still working out very well, so more power to him for doing it,” Schulman said. “It’s a major switch in career, but he’s young and it may be a super hit for him in a new direction.”

The D’Alessios talked about the decision for a long time before Alex quit, Kylie said.

“No better time than right now because everything — life — just gets more complicated,” she said.

They decided that they would give it a year and then decide if Alex would continue with content creation full time, Kylie said.

The first six months were slow. Alex only had 1,000 followers on Instagram and most brands set up their brand deals by October. Kylie remembers wondering when the Instagram account would blow up.

When he hit 2,000 followers, Alex and Kylie were extremely excited.

Until July, they struggled to maintain their lifestyle, she said. But once brand deals rolled in, Alex has already surpassed his yearly income at Clark Construction, Kylie said.

However, Alex is particular about which brand deals he takes, since being authentic is key to his brand.

“If you just take any single paycheck that they’ll give you, that is just an injustice to your community,” he said.

Alex also takes a lot of feedback from his commenters. Other content creators and even professional contractors comment with advice.

Despite his mostly supportive and kind community, Alex has a few trolls in his comment section.

Schulman said he thinks that part of Alex’s problem solving skills came from courses he took at this university.

“That was really the key to these courses, in a given situation, how to solve the problem and get from A to Z,” Schulman said.

Alex acknowledges that certain things, such as completely new plumbing and wiring, should be left to the professionals.

“There’s certain things you just can’t tackle both legally and just with a good head on your shoulders, you know that you probably should leave certain things to a professional,” Alex said.

Schulman said Alex has a bright and successful future ahead of him. While social media started as a casual endeavor, as a casual thing, Schulman can see Alex developing a company and branching out.

He plans to have Alex come in and speak to one of his classes about entrepreneurship and innovation.

“He can give the students a little information, some inducement into thinking outside the box with new ideas in engineering … I think he’d be a great motivator for the students to come up with some ideas,” Schulman said.

Currently, Alex is working on a home bar and has a list of new projects for the future … When he runs out of things to do around the house, Alex might consider renting out the house and moving to another fixer-upper, he said.

“I’ve also done projects at one of my best friend’s houses and have other people’s houses that asked me to do projects for a long time so I think I’d be fine on that front,” he said.

Mon Sep 12 , 2022
My name is Craig Noyes. I am a citizen of Newport, Vermont, and the owner of Noyes Handyman Services, LLC. While originally from the NEK, my family and I have lived all over the country. We spent the last 5 years living in the South Pacific in a remote underserved […] 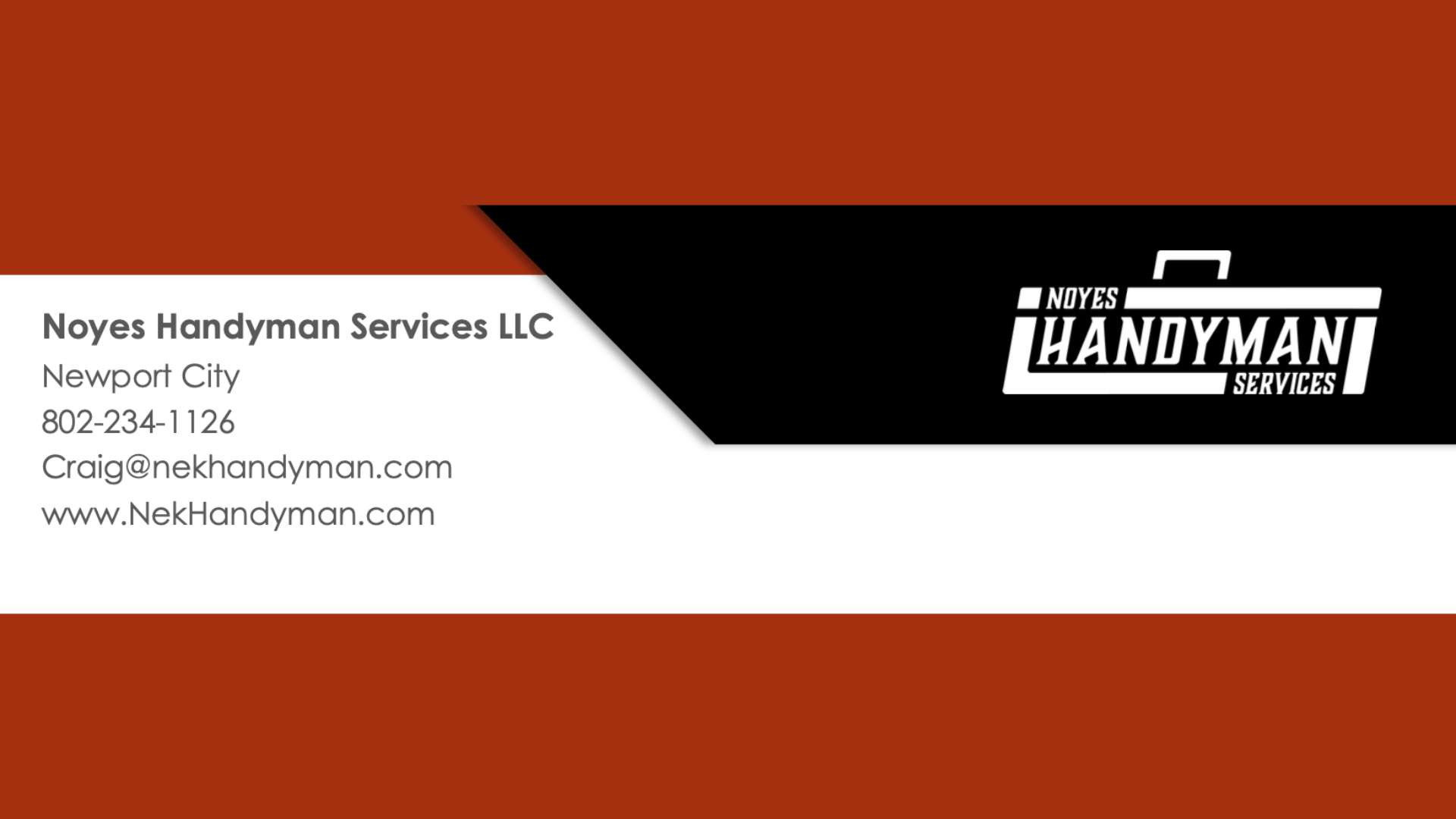